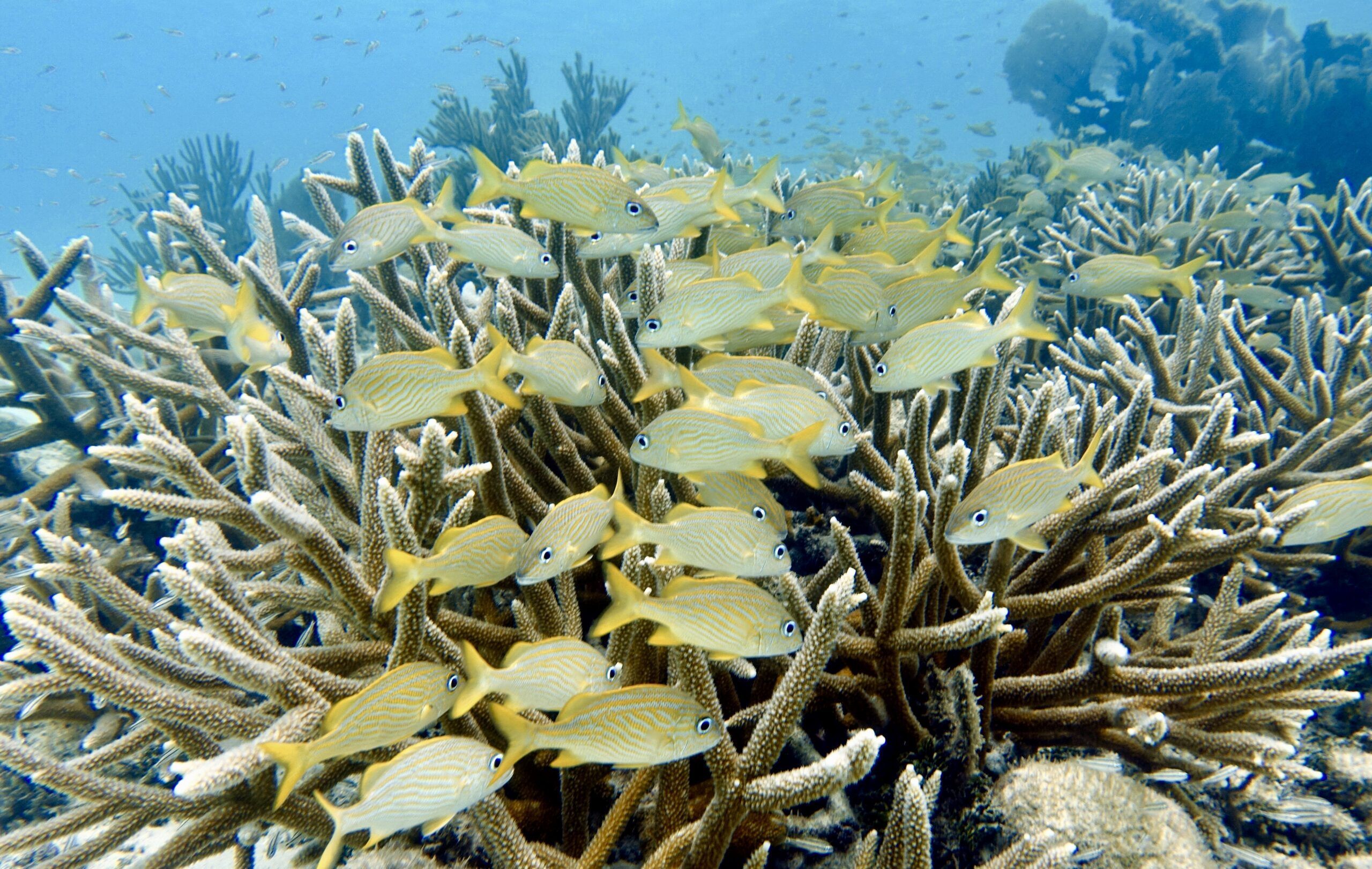 The Mesoamerican Barrier Reef spans 1,000 km from Mexico to Honduras, making it the second longest barrier reef in the world 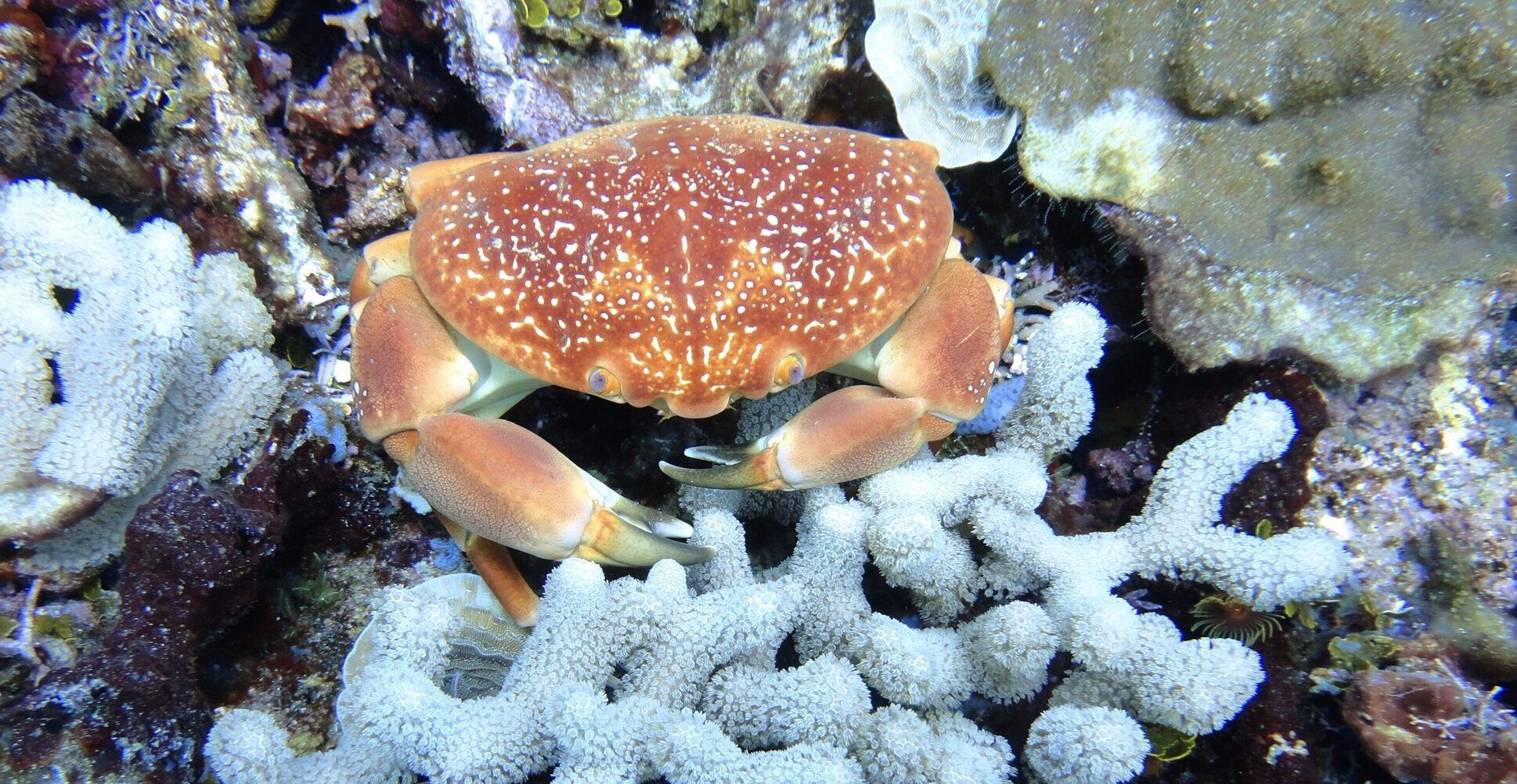 The damage suffered by corals affects microorganisms and other marine species, both plants and animals. 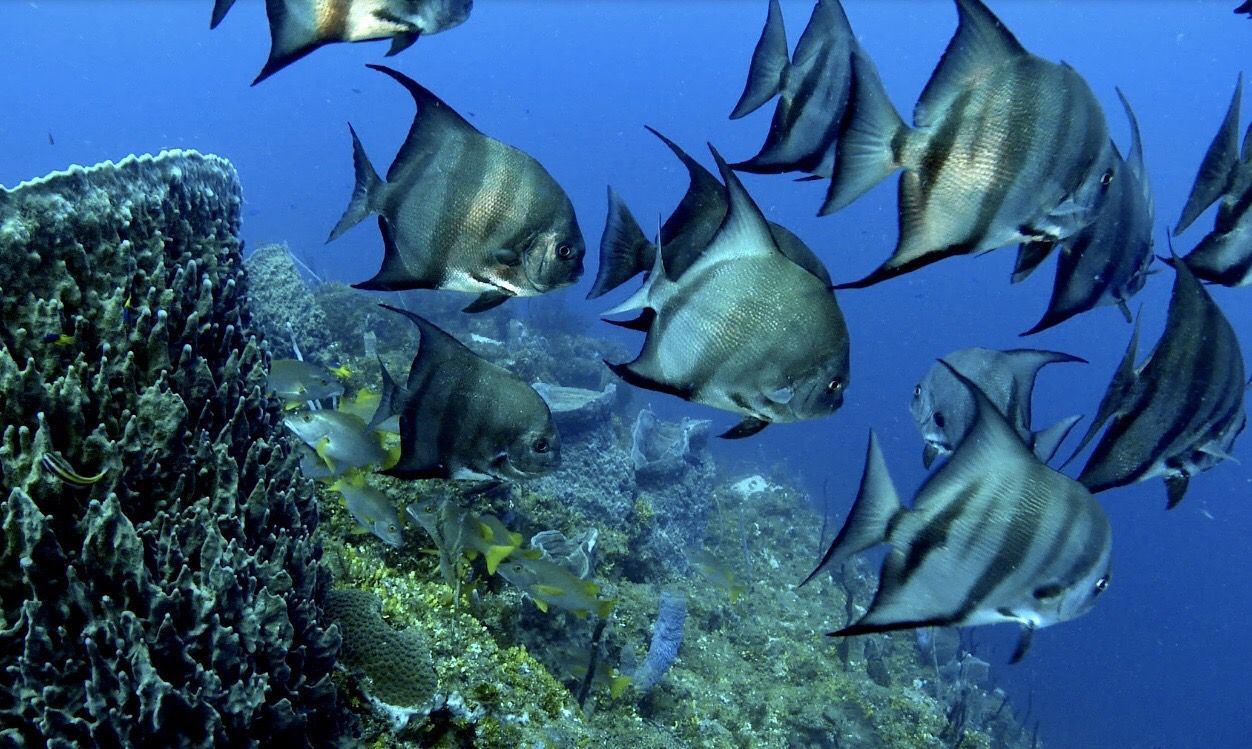 The coral reefs of the Caribbean contain more than 60 types of corals. More than 500 species of fish live there, of which most are in danger of extinction.

What are reefs? What are corals?

Reefs are large rocky marine structures that are formed from the hard calcareous skeletons of organisms known as corals. Corals live in colonies that join over time to form underwater cities that we call reefs. It is a very productive ecosystem that provides great biodiversity and includes microorganisms, invertebrates and fish that live among these colorful aquatic structures.

Each individual coral is called a polyp and belongs to the same group of organisms as jellyfish and anemones, and like them, have tentacles.

Coral polyps have the ability to produce a hard external calcareous skeleton to protect their soft bodies. This skeleton is what grows, as colonies of polyps form and create reefs, which are made up of dead and living skeletons. Corals are very striking with curious shapes and colors that make them resemble plants or trees. That is why they are often confused with plant species, but they are animals and not plants. Corals live attached to this rocky substrate and do not have the ability to move.

Corals have a tremendous peculiarity: they have a mutualistic relationship between an animal (polyp) and microscopic algae that gives them color (coralline algae). If the algae are absent, or die from excess heat in the ocean, the corals become white and regain the original color of the calcium carbonate in their exoskeletons. Coral is, therefore, a facultative symbiotic organism, where the polyp and the algae help each other, although they can live separately. Thus, although coral polyps use their tentacles to obtain food such as zooplankton, most of the nutrients they need are obtained through these microscopic coralline algae. This is why, corals in the tropics are located on the surface of the sea, at a depth where sunlight may still reach so that the microalgae can carry out photosynthesis (around a maximum depth of 25 meters).

The most spectacular corals live in the tropics and their origin of formation is in the Coral Triangle situated between Asia, the Philippines, Malaysia and Papua New Guinea. What makes them the most spectacular is their diversity of colors, made possible by the coralline algae, and the ideal conditions of temperature and nutrients that make them grow very fast and into very different shapes. However, corals can live without algae and in warm areas of the planet and can be found at great depths without their colors.

What damage do reefs and corals suffer?

The microscopic coralline algae (zooxanthellae) that live within the corals are what makes them bright and colorful. Algae and polyps live in a symbiotic relationship helping each other survive. However, with a sustained change in temperature in the ocean (cooling or warming, for example, more than 4 days above 26° C), the corals become stressed and expel the algae. When the algae leaves, the coral regains the original color of its calcareous exoskeleton which leads to bleaching.

Coral bleaching is reversible: when the sea temperature recovers, the microalgae re-establish themselves. However, the recurrence and increasingly extended duration of oceanic heat events in the Caribbean are weakening corals. Weakened corals can die, but the most damaging consequence of repetitive bleaching is their increased susceptibility to other diseases.

The years 1998, 2005 and from 2015-2017 saw the largest bleaching events in the Caribbean in recent decades, coinciding with the bleaching of tropical corals around the planet, due to the effect of El Niño and the North Atlantic Oscillation.

The “hard coral tissue loss disease” (SCTLD) is a disease that affects more than 20 species of hard coral in the Caribbean. The damage is irreversible and has a very high mortality rate (over 50%) in the stony coral in the reefs of Florida and the Yucatecan Caribbean, where it is widespread. While diseases are not uncommon in coral reefs, SCTLD poses a particularly significant threat to the Caribbean reefs due to its wide geographic range, extended duration, high mortality rates, and the large number of affected coral species.

SCTLD is suspected to be caused by bacterial pathogens and can be transmitted to other corals through direct contact and water circulation. There are currently many efforts being undertaken to identify pathogens, relationships to environmental factors, strategies to treat diseased colonies, and to identify resistant coral genotypes.

– by moving the sand in corals that are very close to the beach, covering them completely

– through the invasion of non-coralline algae which set up on the corals and take advantage of the new spaces opened by the breakage and, in areas with many nutrients of human origin (fertilizers, wastewater), end up suffocating the corals and preventing their growth and expansion

– through sediments and chemical compounds that remain in suspension after hurricanes and tropical storms that, in addition to muddying the water, can alter the chemical composition. This is the case of mangrove tannins and their dispersion on the reefs after storms off the Yucatan coasts.

Red tannins from the leaves and mangrove soils flooded after the 2020 tropical storms in the coastal lagoon of Celestun, Mexico, and their spill into the sea. Source: CINVESTAV